Spring down on the farm

When will it be time for turnout? 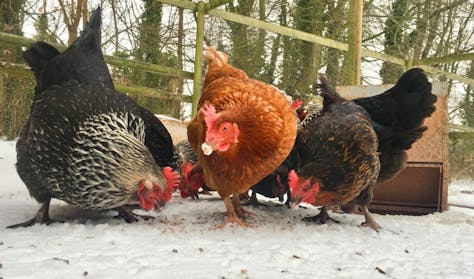 Some years, spring comes early and all our animals can get out and enjoy the fresh grass.  We have been known in the past to put the cattle out into the fields as early as February.  However, this year is bucking the trend, and the weather keeps teasing us with momentary glimpes of spring before sending in snow, frost or torrential rain.  Fortunatley our store cupboards are still well stocked with bedding and feed so there is no urgency.

The chickens were happily living out in the Orchard until Avian Flu returned to the UK and all poultry keepers were required to keep them under cover away from the wild birds.  Once the threat had passed and they were allowed back out, we let them roam free again.  They're happy whatever the weather as they can always retreat into their shed.  But now........they're back behind the wire again as there is a very hungry vixen fox with cubs living near by and she's rather partial to poulty.  Having lost several chickens over the last month, we've decided to keep them in until we've put up better defences. 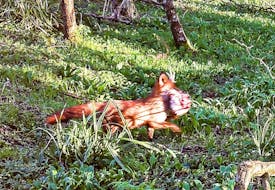 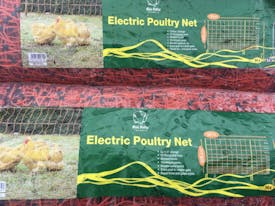 We've also recently bought some Cherry Valley Ducks as they are very entertaining and we hope they will produce some delicious eggs, for now we are also keeping them safely enclosed behind wire to keep them safe from Foxy.  The photo of Foxy was captured by our nature cam when she was running through the woods carrying a pheasant.

Apple and Blackberry (our adorable pigs) have spent the last few months walking up and down the road - going between their winter paddock and a warm cosy stable.  The first time it was due to Apple turning poorly and in need of some special attention, but then it was due to the snow. They're now back out their paddock but it's fairly squidgy! 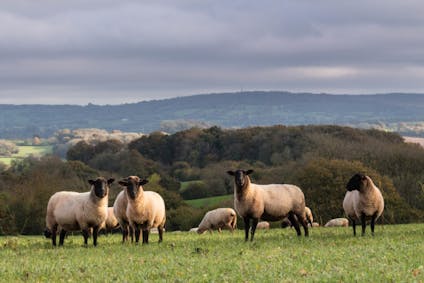 Over the winter our neighbours' sheep have been out grazing the fields - their hooves are so much smaller than cattle's and they're a far lighter creature so do little damage to the fields.  In fact they do a brilliant job of tidying the pastures - they will eat everything down to an even level, unlike fussy cattle who are more selective and leave clumps and tussocks of grass and other herbage.

The cattle have been busy eating the silage and chewing the cud all winter long.  They've been getting bigger and more boisterous and are beginning to smell the grass growing and feeling the urge to get out there.  Let's hope in the next week or two spring arrives in force, the fields dry and the grass grows away.  Then we should see the cattle return to the fields and enjoy the fresh air, fresh grass and be able to stretch their legs.

In fact as I end this blog the sun has come out.....there's hope....the cattle should be out on the farm shortly!