British Mammals at their Best!

The mammals we find in the UK countryside are some of our most recognisable and characteristic species and we are blessed to have so many of them present on the farm.

Mammals active around the farm.

If you ask anyone to name the most familiar countryside animals then I'm sure Badger, Rabbit and Fox will be top of their lists!  Our organic farm acts as a wildlife haven, with incredible biodiversity which supports a huge range of birds, insects, amphibians, reptiles and mammals.  We have been capturing images of some of these fantastic creatures using nature cameras over the last few years.  This spring we have been fortunate to get images of some of the most iconic British Mammals, as they rear their young families and go about their predominantly nocturnal lives. 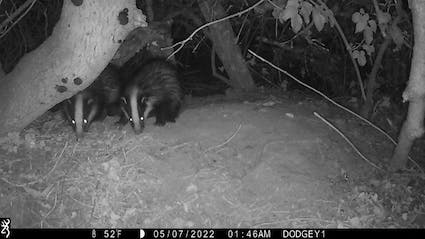 We have several active Badger Sets on the farm - they are one of Britain's largest carnivores and are easily recognisable with their black fur and striking white striped faces.  Badgers are known to enjoy earth worms and also to eat all kinds of small mammals and even have been known to enjoy frogs and toads!  Here is an image of two young badgers emerging from their set for one of the first times. 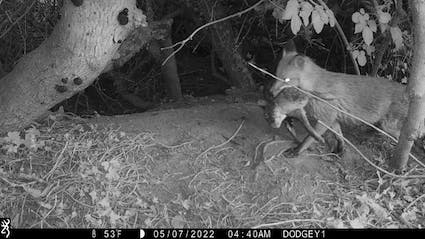 Foxes are found in many different habitats all around the British isles.  We were amazed to see images of this Vixen with her three cubs - what a handful! Foxes are very resourceful and have a wide and varied diet.  In the banner photo we have a vixen with three cubs out exploring their territory, and here we caught one taking a rabbit home for breakfast, and we know they often feast on birds, and other small mammals, alongside worms, beetles and blackberries when in season! 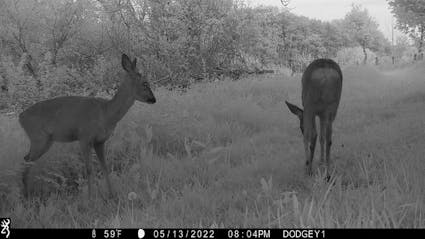 We often see evidence of Deer around the farm - trees nibbled to a certain height or hoofprints along soft muddy paths.  Occasionally we see them out during the day grazing grass in the fields or near the pond.  These Roe Deer enjoy the mixed habitat found around the farm, and are predominantly active at dusk and dawn.  The male Roe Deer (buck) have short antlers which you can see in the image here. 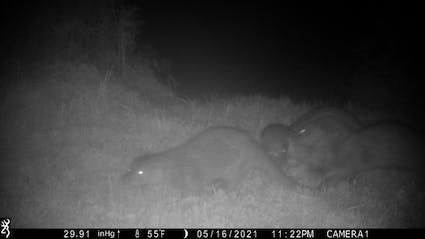 We are so honored to have Otters active on the farm here; and to have obtained photographic evidence of them!  Otters are known to be secretive animals, who can travel over large areas, using up to 20km of river habitat.  Otters usually have litters of two or three young and the cubs don't venture out of their holts for up to 10 weeks after birth.  Here you can just make out the Otter with her two cubs.  The otter enjoys a diet of fish, eels, and frogs during the spring.  They have been known to occasionally eat water birds too such as ducks and moorhen. 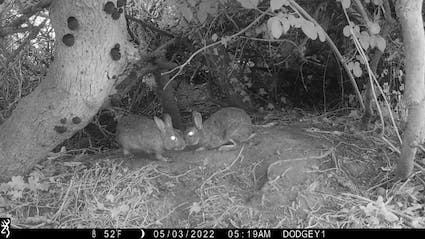 Rabbit are often seen as pests, but can be a key food source for other species higher up the food chain for example foxes, stoats and polecats, with young rabbits also being predated on by badgers and buzzards.  Rabbits typicaly live in warrens close to hedgerows and on the edge of grassland where it is easy to burrow and there is access to food, grasses and plant shoots. 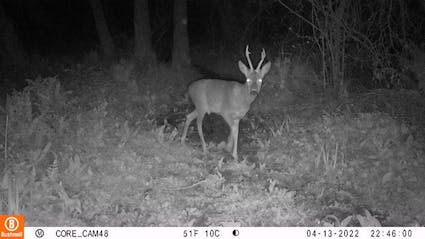 We have many other mammals here on the farm, with a number of species of bats, lots of different rodents, polecat, stoats and weasles.  We hope that you get a chance to see what signs of wildlife are active when out walking around the farm, and we are always happy to share our knowledge of the wildlife around the farm if you want to learn more.